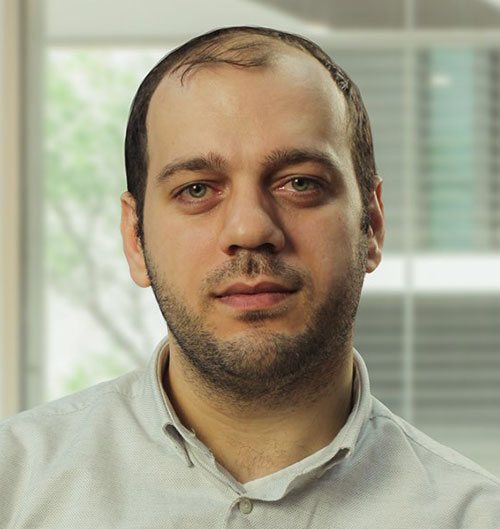 I have created content management system from zero that was used in more than hundred sites which was gallery sites, product catalog sites, ecommerce sites, news portals, online application sites etc. It was used for projects of government and private sector.

Additionally on its basis more than ten ecommerce websites were created with online payment.

A rich search engine with practical and theoretical support in several business areas.

We developed a special CMS for this project.

This system has next excellences than other similar systems:

I have developed a special news aggregation platform. The project had several non-standard functions:

Before the closure of the project, the project was able to compile a database of half a billion articles.

The following technologies were used in the project:

The following algorithms were used:

I got experience working with Big Data and managing Big Data with MySQL, optimisation of high loaded project, machine learning.

2011 - 2016
The Ministry of Emergency Situations of the Republic of Azerbaijan, Baku, Azerbaijan

The Database environment for the project was Oracle and I provided technical support and I have practices to guide team to develop a secure database application as per the client's security policy.

Actively Participated in the development from scratch following programs:

Programming and developing web sites and Flash based games

I created websites for government agencies and banks. The works were different. Has been involved in high loaded projects.

We have worked with several IT companies in Azerbaijan, which performed very well in the negotiations but lagged during the actual work process. However, in 2020, we have decided to try the services of Elchin and his team.

Software development for the corporate website, its support, and other web projects is a complex task that requires prompt coordination of several teams and vendors. We're lucky enough to have a partner like Elchin. They are responsive, available 24/7, and fast in action. It's good to have a responsible partner that you can count on.

I'd like to recommend Elchin and his diligent team for any size of the organization and any tasks related to software and web development.

Elchin is highly professional senior programmer. During his experience at Kapital Bank I can say that he’s been very dedicated, responsible and delivered his job according to deadlines. He has the skills to offer out of box solutions.

During a few years working with Elchin we have finalized a number of successful web projects. Working as a programmer, Elchin was involved in the back end part of these projects. During his work he has shown his professionalism, responsibility, accuracy and with great moderation. He was able not only to understand the task itself, but also to notice every little detail of the project.

Elchin is one of the professional web expert on his field. He has a spacial and creative approach to the each project. If you want professional and excellent job to do, Elchin is a person that you can deal with. Many well known companies entrust their web sites or web projects to him. He always applies new technology to projects. His projects is one of the secure, well coded and modern projects in Azerbaijan.

Elchin is one of the professionals I've known in the field of web programming. I worked with him for several years and witnessed how he goes forward day by day. The key to his success is that he never stops learning. He is characterized by his: 1. Insightful strategic thinking. 2. Exceptional analysis and synthesis skills. 3. Deep knowledge of web programming, web services. 4. Amazing commitment to getting things done. 5. High level of productivity.

Participated in the development of the following projects

My name is Elchin Nagiyev.

The first education I received in high school. I always liked mathematics and to study the nature of physical phenomena being around us which we at all don't notice and on it I have entered the university and began to study physics.

In my university years academic interest in the study of physics was added and after completion of bachelor I entered the Masters. I took my master degree in Baku State University in the faculty of Physics in specialty of Gas and plasma electronics and I defended my dissertation.

While taking my master degree and after university I haven't found work on my major specialty and decided to work like a programmer.

I worked in several corporations in our country such as MEQA, DreamArt, JIS, Prosper, and The Ministry of Emergency Situations.

This companies is dealing with application and web development and has 20 or more employees. After starting to work here I put my theoretical knowledge in programming into practice and began to learn new technologies in IT field.

In 2007-2008 years, I joined the military forces within a year and then return to the same company where I worked before.

In MEQA Company, I worked for 3 years and then resigned voluntarily and went to work in DreamArt Company where I worked for about a year until I got a job at the Ministry of Emergency Situations in October in 2001 until 2016.

Now I am working as a programmer at the Kapitalbank.

In addition, I worked with many companies in Azerbaijan such as Prosper, JIS like a freelancer in the field of creating websites.

In January 2011, I passed the driving test and got a professional BC driving license.

In January 2016, I passed the exam on karate and was awarded the black belt.